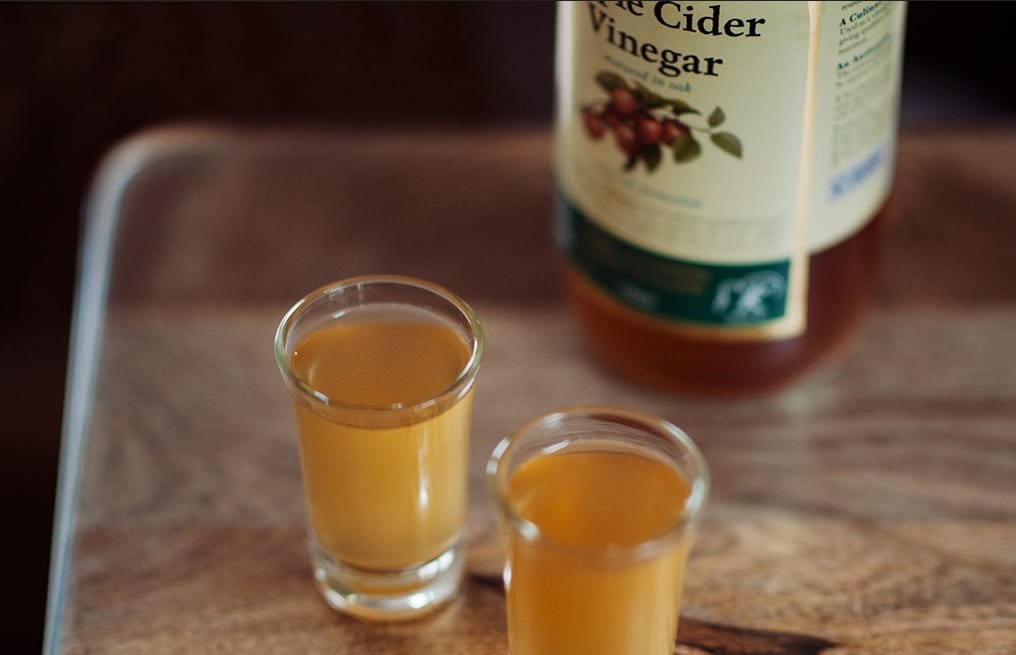 Unless you’ve been living under a rock the past few years, you’ve heard about apple cider vinegar—or ACV, as it’s affectionately called by its die-hard fans. According to online buzz, this ancient remedy reduces inflammation, promotes weight loss, and relieves everything from arthritis to leg cramps.

Some fans claim it does pretty much everything except solve our country’s current political woes. (Check out the many uses for apple cider vinegar and how it promotes better health.) Natural remedies (like, um, snake oil?) that supposedly fix everything that ails you are often too good to be true, so I was skeptical. But then my sister began taking ACV on a daily basis. At first, it was merely to serve as an immunity booster. But she swore it also helped her digestion, allergies, and simply made her feel better. So I decided to jump on the ACV bandwagon for 30 days straight—here’s what happened.

Before starting this experiment, my thoughts were simple. My mom cooks with ACV, I love apples, and I like vinegar on my salad. How bad could it be? Well, just as bad as taking a regular shot is my answer.

The first week and a half I had to get used to taking a pungent shot of vinegar every morning. In the beginning it felt like I was getting my day started with a shot of alcohol and I wasn’t into it.

#SpoonTip: Take the shot before you brush your teeth, so you can brush the taste out after.

At the end of week two, I was finally used to the taste and not gagging anymore. This was when I finally started feeling and seeing the results. The small shot would actually fill me up so I didn’t need to eat as much. My skin also got significantly “glowier”.

#SpoonTip: Don’t take the ACV out of a shot glass. Take it out of the bottle or pour a bit in a cup, so it feels less like pregaming your day.

Week three and four were simple. It became part of my morning routine and the taste became familiar. Also, when you start seeing positive results from something it becomes easier to do.

The folks at Ethan’s, a Boulder, Colorado-based company that creates ACV elixirs in various flavors, were kind enough to provide me with a month’s supply of flavored apple cider vinegar “shots” (four teaspoons if you want to try this at home). The first one I try is turmeric apple, which has a peppery zing that’s far more appealing than straight-up vinegar. (Plus, the curcumin in pepper has anti-inflammatory and anticancer properties.) In fact, it’s so tasty that I’m wishing I could pour it into a pint glass and sip it at dinner rather than make do with one shot. (Psst! Here are 5 health and beauty benefits of turmeric.)

Within hours of my first “dose,” something even stranger happens. My cravings for sugar (which are legendary) disappear. (Here are 15 painless ways to crush your sugar cravings for good.) Completely. Coming from someone who regularly has chocolate for breakfast—not to mention all the other meals—this is no small feat. By the end of the week, my taste for sugar is all but eliminated. I bite into a fresh apple and it tastes sickeningly sweet to me; I can’t even finish it.

Curious as to why this has happened, I talk to Katie Rankell, a registered dietitian and certified diabetes educator at UC Irvine Medical Center.

“Acetic acid found in vinegar has been shown to lower blood sugar and aid in a feeling of fullness,” she explains. “It lowers blood sugar by reducing the absorption of carbohydrates.”

In other words, so far ACV’s living up to the hype.

After finishing my turmeric apple shots, I move on to Ethan’s cinnamon maple flavor. It’s described as a good starter flavor for ACV newbies, but my taste buds can’t reconcile the sweetness with the tart vinegar. I dutifully drink my shot every day, but I’m not quite as excited about it.

Ethan’s ginger pineapple mix is a much better fit for my taste palate. Plus, ginger’s been used for thousands of years to treat ailments ranging from arthritis to migraines. I don’t suffer from any of these health issues, but who knows? Maybe ginger (and ACV) will keep me from ever having to. (Putting more ginger in your diet has some pretty amazing benefits.)

Sadly, my stomach doesn’t agree. Halfway through the week, I start to wonder if my daily shot is systematically stripping the lining from my digestive system. I feel like I have internal rug burn. I try diluting the ACV, sipping it slowly rather than throwing it back as a shot, and telling myself how good it is for me. None of it works. My stomach hurts.

My sister swears that ACV actually helps her digestion, but Rankell doesn’t seem surprised by my complaint. She explains that ACV’s side effects include a worsening of stomach ulcers and acid reflux. (It can also erode tooth enamel, lower potassium levels, and enhance the effects of some prescribed medications.)

I don’t have any pre-existing gut conditions. Still, I’m queasy.

Every morning, I eye the bottle of ACV in my fridge, working up the courage to take a swig. Again. Returning to the flavor I like best—turmeric apple—helps. So does catching my gut off-guard by taking the shot at different times of the day.

But aside from still being turned off by sweets, I have to admit that I haven’t noticed a huge change in my health. Since I don’t have high blood pressure or cholesterol and I’m already at a healthy weight, I ask Rankell: Is there any point in my continuing with ACV? (Here’s how to lower your cholesterol naturally with food.)

Her answer is no. “Blood pressure and cholesterol will lower with any weight loss or improvement in dietary habits,” she points out. “ACV specifically has not been shown to have a significant effect.”

But if I do continue taking it, Rankell recommends diluting it and having smaller amounts—say, only a teaspoon or two in warm water, tea, or salad dressing.

Despite her words of caution, I admit that I’ll most likely stick with ACV. I like the taste, I don’t miss my sugar cravings, and—let’s be honest—there’s nothing wrong with striving to be healthier, even if it’s one teaspoon healthier each day. Your body’s a temple and all that.

If you decide to do the same, check with your doctor first.

After a month, I decided that ACV was not something I wanted to take out of my diet. I lost 4 pounds during the month, noticed healthier skin, less stomachaches, and just overall felt like it started me on the right track in the morning.

#SpoonTip: Leave the bottle of ACV wherever you get ready in the morning, so you don’t forget to take it. The bottle can be stored in room temperature, it doesn’t need to be refrigerated.

With this in mind, I live a healthy lifestyle already. I exercise regularly and have a healthy diet. So, ACV will not miraculously fix all your problems if you still eat McDonald’s for every meal.