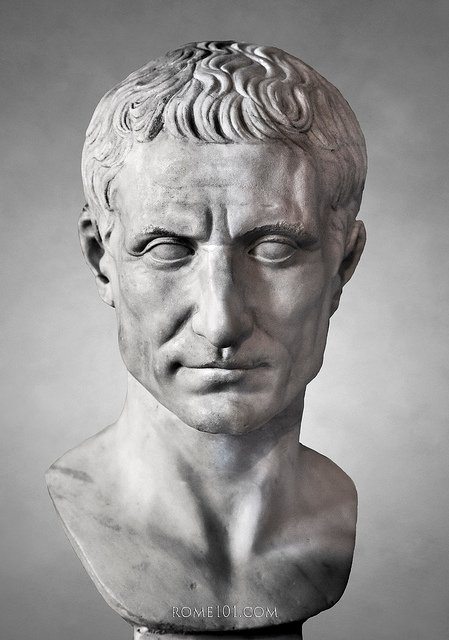 If you ever wanted to feel lifemogged or inspired to work harder, here is Julius Caesar's life.

>born in the Roman slums, noble family but relatively poor
>15 yrs old, becomes patriarch of the family when his father dies
>16, becomes high preist of Jupiter and gets married to the daughter of the current dictator (Sulla)
>17, has a daughter with his wife
>18, declared enemy of the state for refusing to divorce his wife and has to flee Rome
>19, is pardoned and divorces wife, joins the army
>20, wins the Civic Crown for bravery in war, the second highest commendation in the Roman army
>23, becomes a lawyer and literally becomes Phoenix Wright
>25, is captured by pirates at sea
>pirates ask for ransom from Rome, Caesar scoffs at the low price and tells them to ask for more money
>is such a Chad he starts ordering his captors around like he is the boss
>the pirates end up liking him so much they act like he was their leader
>25, after being released he raises an army to track down the pirates and crucifies them all
>26, raised another army and fought in war as a commander for the first time
>28, gets into politics and becomes a military tribune
>31, becomes a magistrate in Spain
>33, marries again, this time he marries the grandaughter of the dictator Sulla (what a Chad)
>35, becomes an aedile and throws lavish games and gladiator fights in Rome
>37, becomes Pontifex Maximus (literally the Pope of the Roman religion)
>38, divorces wife and becomes Governor of Spain
>40, forms the first triumvirate with the 2 most powerful men in Rome (Pompey and Crassus)
>41, becomes Consul (basically president)
>passes a bunch of popular bills and laws that piss off the rich elite
>becomes a superstar among the common people
>gets married again
>42, gets assigned Governor of Gaul after his term, has to stay away from Rome because his enemies (virtually the entire senate) want him dead
>starts the Gallic wars, conquers all of Gaul and parts of Germany (western europe)
>cont.